Although the Euro countries are discovering some of the economic downsides to having a unified currency, moving from Canada to the U.S. highlights the personal downside to a non-unified currency – when you convert your savings from one currency to another, it’s impossible to avoid losing a significant amount of cash. Having purchased a home in the U.S., the looming need to make a down payment had us searching for options to  do this in the most efficient way possible. Here are the options we considered, and what we ultimately used.

This wound up being a slightly lengthy post, so I’m going to put a break here to save your RSS reader if you don’t care about this topic. You might at least be amused by the picture of the place I ultimately went with, though :).

Okay, so we never really considered this one, because the cash exchange rates posted by banks are just ludicrous.  Still, this is in fact what many people pay when they are going on vacation and want to land in their country of choice with some cash in hand. Here’s today’s posted exchange rates from TD Canada Trust, the bank I’ve used since growing up here: 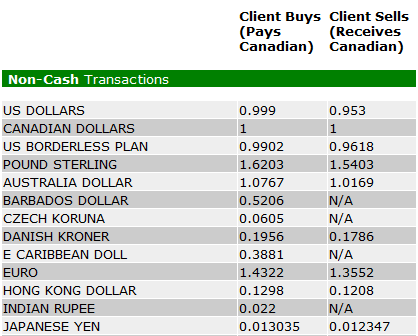 You don’t have to look very hard at the table to see that the gap between the buying and selling rates is large – almost 5% for US dollars, and more for other currencies.  If I walked into the bank and converted $100 into Euros and then immediatley back into Canadian dollars, I’d have just $94.62! In general, the rates you see here are about 2.5% off the mid-market rate, which is what the currency trades for between banks and other financial institutions.  If you’re buying, you pay 2.5% more than the mid-market rate indicates, and if you’re selling you get about 2.5% less.  That might be OK if you need a few hundred dollars of cash while on vacation, but if you want to make a $100,000 down payment, that’s $2,500!

The only option I’ve really found that’s worse than the above is airport money changers, where the gap is so large it’s just unbelievable.

By contrast, perhaps the very best option I’ve seen is retail money changers which you used to find in the shopping mall in Malaysia.  They’d sell US dollars at a rate of RM4.00 per USD, and buy US dollars at RM3.97 (RM = Ringgit Malaysia, the local currency). I don’t know if their spreads are still so narrow, or why their rates were so awesome. Other currencies weren’t quite as amazing, but still extremely good compared to what you see above.

There are a variety of online exchange services that you can use to get money from one place to another, as long as you’re able to send the money into a bank account as opposed to carrying it in cash. You can get your money to these places via wire transfer, bank draft, or electronic funds transfer (EFT), with the latter being the best option as it’s free. They’ll then convert what you give them, and typically either wire transfer or EFT it into the destination account. Since I have both U.S. and Canadian bank accounts (from having previously lived in the U.S.), this is great option for me.

A service I’ve used on a number of occasions for this over the course of many years, and never had any issues with is XE Trade (http://www.xe.com/fx). While I can’t say I really shopped around to find the best online broker, rates here were reasonable, service good, and it conveniently offered free EFTs in and out of both my Canadian and U.S. accounts. It does take about 3-5 business days between initiating the transaction and having funds in the target account, but a rate is quoted when you book the trade and is the rate you get no matter what happens during that 3-5 day period.

This is what a conversion would cost right now using XE Trade:

While I’m sure services vary, the interesting thing about XE Trade is that the rate never depended on the amount.  Even as I looked into a large transaction, I was getting the same rate as if I was doing a relatively small one. As I didn’t know better, that was what I was going to go with, until I found…

I’m sure every bank refers to this differently, but for conversion of large sums of money, they offer a special “treasury” rate. Unlike their retail rates, these are for spot transactions only – after you hear the rate, you have to decide whether to book the transaction with a 30-60 second period during which the rate is valid.  The rate itself is dependent on the amount that you’re converting.  I don’t know exactly where the different rate levels are, and I’m sure they vary by bank, but at least for my bank, they indicated that they had different rates at each of the $25,000, $100,000, and $500,000 levels. Besides converting a large sum of money, you *may* also need to have an account with that bank in both currencies. This was the case for me, as I had both USD and CAD accounts with TD Canada Trust.

When you’re converting your entire life savings, you want to do business with a company that you can trust – not one that might take your cash, promise that it will appear in some foreign account some day, and then disappear. If you look at the Toronto skyline, you’ll see a few institutions that seem to fit that bill:

[This photo is from DigitalJournal.com (the above image links there), and is available under a creative commons license]. You can see the Bank of Montreal (BMO) logo, the red Scotiabank S, and the TD Logo – and I think that’s the CIBC Logo on the middle building there.

But why put your trust in one of those institutions, when you can take a bank draft for every penny you’ve ever earned to this place in Chinatown: 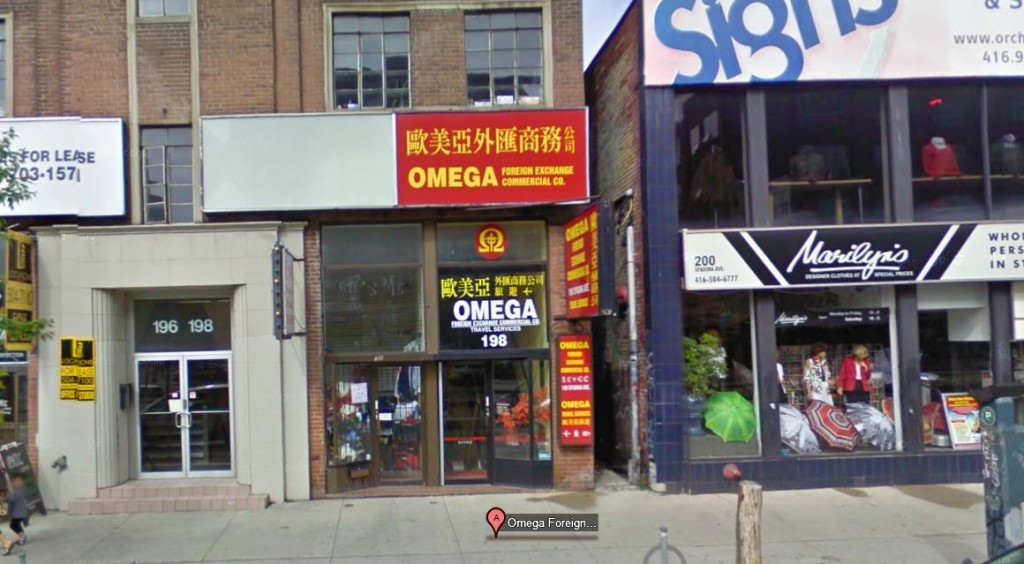 [This photo is a screen clipping from Google Maps]. Anything beside a store that sells garish umbrellas has got to be good, right? And hey, in case you need to go check that your money arrived, Omega Travel Agency is a desk that sits in the lobby of Omega Foreign Exchange!

You might think I’m just joking around here, but I’m not. Omega had the best rates by a good margin, and I’m lucky that my friend Herman told me that they do large deals. We had used them previously for smaller cash exchanges, much to my annoyance since I pointed out to Valerie that saving a few bucks when converting say $500 is totally not worth the time, gas, parking, and effort of going downtown. But processing the downpayment on our home, Omega had a rate that was just 0.3% above the mid-market rate (1 USD = 0.9782 CAD at current rates).

The experience was a little surreal, because you really are holding a bank draft made out to Omega for a huge sum of money – and for an informed thief, that’s even better than cash, because if someone managed to steal it from you, they could walk into Omega and send that money anywhere in the world! And while you could probably get the transaction stopped before the funds were deposited in such an event, an informed thief would probably keep you locked up for a few days (or at least hide your corpse for that long) to prevent such a cancellation. It was also an odd experience because the couple at the teller next to me (there are two in total) were debating whether to convert all $40 of their US cash – but settled on asking for $5 back in USD and the rest in Canadian dollars.

Omega’s cash rates are good, but for large transactions they seem pretty much unbeatable and they’ll wire the foreign currency into the account of your choice for just $25 (TD Canada Trust charges about $80 on large sum wire transfers!). If you’re willing to take a little risk on a big transfer, you can find Omega Foreign Exchange at 198 Spadina Avenue in Toronto’s Chinatown district, or call them at +1-416-593-8867. You’ll probably get a good rate on smaller transactions too!

This is the option I ultimately went with!

If 0.3% is still too rich for your blood, then there’s another method I stumbled upon that is riskier, slower, and higher effort – but in which you pay almost nothing.

Essentially, you buy a stock that is cross-listed on both the Toronto Stock Exchange (TSX) in Canadian dollars, and on the New York Stock Exchange (NYSE) in US Dollars.  You buy the stock in one currency, have your broker “journal” the stock over to an account in the other currency (preserving the # of shares you own, but changing the exchange it’s traded on), and you sell it on the target exchange.  The net cost to you is two trading commissions (typically $10-$20), plus the bid/ask spread (which is negligible on a heavily traded stock). Some other forum-goers suggest a variant of this in which you avoid the risk of temporarily holding a security (while the gambit is in process) by shorting the stock in one account, buying it in the other, and then journaling things over to cover the short sale. There was some debate as to whether that actual runs afoul of any securities legislation, though.

There a post with some additional links on this here.

The risks, delays, and effort with this strategy made it a bit unsuitable for the amount of time I had available, but it was at least interesting to learn about!

I hope what I learned in looking for the best way to do things is helpful to you!