In an earlier post titled Rogers – All About FAST, I discussed the rather underwhelming performance I was getting from Rogers.

Faster even than the Nikon D3 I’m still using, it seems!  Nikon service (on my D7000)… not nearly as fast.  In any event, Olivia certainly doesn’t move slowly!

Rogers? Not so much. But apparently, they’re improving a little, as reported in this post on Engadget which describes bumps to both the speeds and bandwidth caps across all Rogers Internet offerings: 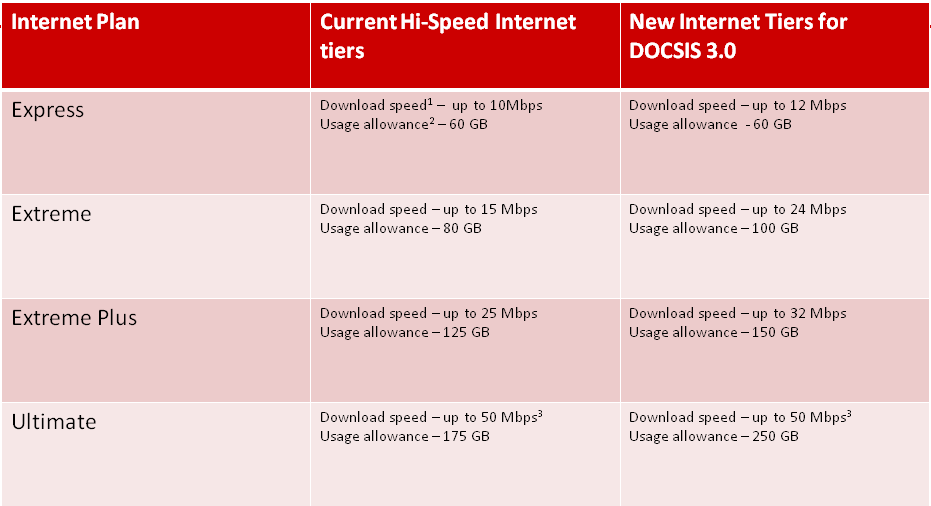 The problem with the Engadget post is that it doesn’t actually spell out all of the details; specifically:

Rogers is quite straightforward about the details in their own announcement, which they posted here – though at the same time, it’s counter-intuitive as to why they’d offer slightly higher caps if you switch to a new modem. Amusingly, if you click the Rogers link above, the table you see reproduced here is actually a very large 1,400KB bitmap file which gets shrunk in your browser to the appropriate size. What you see above in this page is a 34KB PNG file that looks exactly the same, to the pixel. If everyone made images 40 times bigger than they needed to be, then we’d all need to be on the Ultimate program! As a further jab, their link on the page to see what kind of modem you have doesn’t even work!

Of course, I have a few more thoughts on this whole thing…

… which I’ll divide up into a few sections.

The Service I Have

In my earlier post about Rogers, I complained about getting roughly 15% of the speed I was paying for. And that things that worked great when I first got the service, like watching 1080p content on Youtube or Gametrailers.com, had degraded to the point that any form of “high definition” was unwatchable at 1080p or even 720p. I also reported intermittent interruptions in the middle of Starcraft games, which I still experience – and which weren’t an issue when first switching to Rogers.

So have things improved? Fortunately, yes, I’ve noticed consistently better service in the past month or two – but sadly it’s still significantly lower than what I got initially (and what I pay for):

It’s a little sad that I feel at all pleased to be back to the speeds I had in 2002, but I suppose you take what you can get!

But The Issue Is Deeper…

One of the things that I couldn’t fully understand during the periods of the worst service was the inconsistency between Youtube and Vimeo; any form of high definition on YouTube was (for a time) completely unusable (and standard definition would often stall also), but at exactly the same times, Vimeo would *usually* not have trouble streaming at 720p without interruption.

Doing speed tests with additional servers confirmed that performance was highly dependent on what network you were talking to. At the time of writing this post, here’s what I’m seeing for the reachable servers that support the dslreports.com Flash-based speed testing tool:

I ran the same tests over a few days and have seen fairly consistent results – persistently low speeds to Comcast, and the best results but worst latency to TekSavvy here in Toronto. This makes it pretty clear that the issue is not the “last mile” connection between Rogers and my cable modem, but rather, it’s the connection between Rogers and various other networks. This also explains why Youtube could be slow while Vimeo was fine – different paths to the Content Distribution Networks (CDNs) used by different video services.

So Whose Fault Is It?

This makes assigning blame for slow actual speeds quite complex. Is it Rogers fault for not getting enough bandwidth to the networks that it peers with? Is it the fault of Comcast or some other network that Rogers is connected to, or perhaps a transit network (like Level 3) that connects the two together? Is it YouTube’s fault for not having a CDN that delivers good performance when serving up content to Rogers customers?

In fact, it turns out that this is indeed a complex and fascinating question that the ISPs themselves love to fight about. Here’s an article about a fight between Comcast and Level 3 over this issue; if you fully grok the article on a single read, you’re smarter than I am! After reading a few other posts on the topic, I started to understand how complex the topic is – and there seems to be no “correct” answer. My dumbed down synopsis is something like this:

The important thing here is the money flow:

That all seems very nice and orderly, but Level 3 upset the balance of things by becoming a CDN for Netflix. That is, Netflix did a deal to pay Level 3 to stream videos to its customers. This put Comcast in a very strange position. Other CDNs, like Akamai (the biggest and most well known CDN) were paying Comcast to serve content to their end users, but Level 3 was charging Comcast for “access to the Internet”. So where before, Comcast got paid by a CDN for delivering video to its subscribers, now it’d actually have to pay Level 3 every time Level 3 served up a video.

Apparently, that did not sound too good to Comcast, so Comcast basically said “you know, instead of me paying you, how about you pay me… or I’m cutting off access to my subscribers”. Of course, it wasn’t quite that simple, because thanks to the nature of the Internet, if Comcast had simply turned off all connections to Level 3, that wouldn’t actually have cut off the connection to Netflix. Rather, instead of the connection to Level 3 (and Netflix) being direct, it would have gone through one of Comcast’s other backbone providers (Tata). The catch, it seems, is that Comcast’s connections to Tata were apparently persistently congested – some argue intentionally. So the net effect of being cut off by Comcast is that Level 3 wouldn’t have been able to deliver content to Comcast customers at useful speeds – which in turn wouldn’t be acceptable to Netflix.

But after all that, I still can’t pick the bad guy:

It’s impossible to say from a few speed test numbers, but the situation with Rogers seems eerily similar to what’s described above – the last mile connection is fine, but there are hugely varying speeds depending on what you’re trying to connect to and how you’re trying to connect. Is Rogers fighting for our freedom? Exploiting the fact that we’re captive customers and trying to make money on both ends? As a consumer, it’s near impossible to say.

I Know Who I’m Blaming

Above, I said I don’t know who the bad guy is. So how can I know who I’m blaming?

Indeed, the settlement issue between backbone providers, ISPs, and CDNs seems extremely involved, and in reality I’m sure I only understand 10% or less of what’s actually going on – especially since there isn’t a lot of transparency about these arrangements.

But I don’t care. I’m blaming Rogers. This might sound unfair on the surface of things, but it’s really not. I pay Rogers a decent amount of money, on time, every month, and I’m paying that for high speed connectivity to the Internet. Specifically, I’m paying that for high speed access to content that could be in someone’s CDN, or could be on someone’s computer in Asia. Specifically, I am paying for this access because of valuable services like Youtube, or Vimeo, or SmugMug, or any number of others. If none of those things existed, I wouldn’t need high speed Internet access. Far slower access options were perfectly fine for browsing the web and reading E-mail.

Rogers has every right to negotiate with CDN and backbone providers to get a good deal – and in fact, I hope that they succeed in this regard, because if they don’t, Edward Rogers III isn’t going to be the one picking up the tab, you and I will in the form of higher fees (for DOCSIS 3.0 cable modems, perhaps). But the complexity of these negotiations is something for Rogers to manage, and having certain services work poorly as a bargaining chip just isn’t acceptable.

Is this what Rogers is actually doing? There’s no way to know. But again, it doesn’t matter. Whether it’s simply that certain interconnection links are poor, or a standoff over who pays who, or a dog that chewed through a cable, the bottom line is that 2.5 Mbit/s is not 10 Mbit/s even though $50/month is in fact $50/month. The background issues are fascinating to learn about, and mind-numbingly complex – but so is getting fresh fruit to the grocery store, I’m sure.

The thing that’s incredibly ironic about all of this is what I started the post with – Rogers raising speeds (if you pay a little extra for a new modem) on the last mile. Just like the “Speed Boost” claims from last time (which Roger’s representative Chris was nice enough to explain), these supposed speed increases are fairly meaningless – you might be able to download something from Rogers faster than before (like their 1.5MB bitmap image), but the rest of the Internet will be just as slow.

It’s like raising the speed limit on highway off-ramps (you know, the kind that end in a traffic light that’s usually red) to 150km/h. You could do this for kicks, but do we really need to race to the red light as quickly as possible?

Rogers, it’s good to see the small improvements. But rather than Speedboost and DOCSIS 3.0, can you put a little more focus on the things that really matter – getting to the rest of the Internet?