I’ve long had a thing for lots of usable display space.  For about eight years, I used two (and later three) 19″ CRT displays in a multi-monitor setup; this was sufficiently heavy that my desk would curve under the weight.  Then, in 2007, a 30″ display I’d been eyeing – the Dell 3007WFP went on sale, and allowed me to replace my aging CRTs with one large LCD panel.  I immediately disavowed multi-monitor configurations, significantly preferring a single large display.  That monitor served me well for the last 8+ years, but in December I finally swapped it out.  For something bigger – the 55″ LG EG9600:

First things first; the EG9600 is not a monitor – it’s a 4K OLED TV that’s designed for your living room, not for your desk. OLED’s claim to fame is its image quality, in particular the black levels it is capable of producing. I’d been looking for a monitor for some time, but the things I wanted – IPS panel, 30″+ screen, 4K resolution, accurate colors with a wider gamut – never seemed to show up in a well-received product. It was also becoming clear that computer monitors were increasingly become a niche item that fewer companies were putting much effort into. I began to entertain the possibility of using a TV in this fashion, and after some research, decided on the EF9600 (flat) or EG9600 (curved). Several factors drove this decision:

Ideally, I’d have liked a 40″ display – large enough to avoid text scaling, but small enough to be practical on my desk and to provide the increased pixel density I’ve gotten used to on the Chromebook Pixel or Retina Macbook Pro. Unfortunately, essentially all higher end TVs sold in North America seem to start at 50″; LG’s OLED lineup was no exception, with 55″ being the smallest display offered.  This meant lower pixel density than my existing monitor (80ppi vs 100ppi previously).  I decided I could sit a little further back and decided to take the plunge.

I still had to decide on the flat EF9600 vs the curved EG9600; both were priced identically, with no significant feature differences. I’ve made fun of curved screens in the past, joking that they seemed completely useless unless you want to sit right in the middle of the arc – which you’d have to sit two feet away from the screen to do. I never thought that was something I’d actually do, but here I am! Frankly, though, even at this distance I doubt there’s much difference.

Currently, 4K 60Hz 4:4:4 on a PC isn’t something you can realistically expect to work out of the box unless you’ve checked a few things. In fact, I’ve still been unable to make this work at all with either a 2014 retina Macbook Pro, or with a Dell XPS 13. Fortunately, neither of those devices is my primary PC! Still, even my desktop required four manual steps to get things to work acceptably: 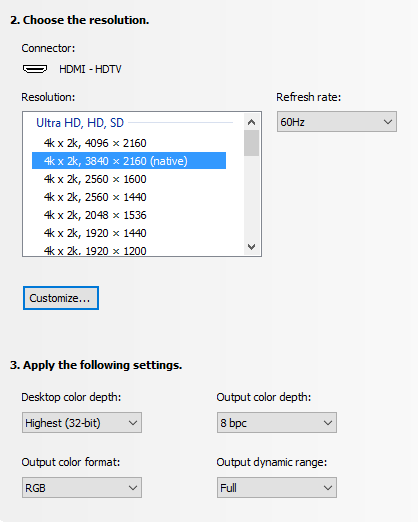 Although core functionality and some of the bigger initial issues were resolved with the setup and settings above, there’s a number of lingering annoyances for which I’ve found no solution:

The dimming issue is by far the largest of these; the power issue is a minor inconvenience, and the other issues don’t bother me at all in practice.

Was it worth it?

At night without light, blacks are sufficiently black that on some images you can’t see the edges of the screen. This is with no processing of the image from my camera:

For me, the LG EG9600 is definitely an improvement over the 30″ Dell that served me well for over 8 years; I love it and I plan to stick with it for quite some time. However, unless you spend a good portion of your time on photos, videos, or games, there’s probably better options for most. If you do go this route, make sure you’ve got HDMI 2.0, a capable GPU, and a willingness to accept the limits of using a TV!